When I moved to Scotland in my late teens and first heard of this dish my response was “Cullen what?! Stink?” When I was told it was a fish soup, not having ever heard of a fish soup before, I thought “stink” was highly appropriate. Of course over the years, as I have become more and more food obsessed, I am much more aware of how fabulous a little bowl of fishy goodness can be.

Cullen Skink can be described as similar to a chowder but without the sweetcorn, or as having the depth of flavour of bouillabaisse but without the herbs, or more simply as a smoky, fishy, thick, creamy, warming bowl of deliciousness!

There are lots of different recipes with many cooks swearing that theirs is the best or the original! The key ingredient in them all is good quality undyed smoked haddock. This is my version… 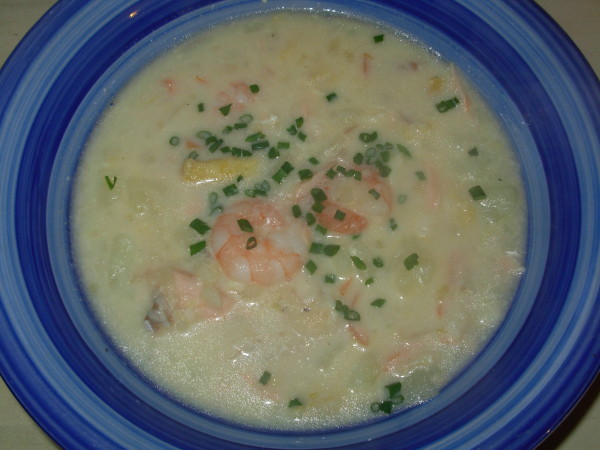 My recipe is an adaption of that of Nick Nairn, a self-taught Scottish chef who champions the use of fresh Scottish produce. He was the youngest Scottish chef to win a Michelin star, so I feel a bit cheeky tampering with his recipe but I find it too rich with the cream included and I prefer to use fish stock where he uses water and I adore it with a few prawns added in at the end…

1) Melt butter in a saucepan, add the chopped onion and cook gently until soft but not browned.

2) Add milk, fish stock and potatoes, bring to boil and simmer for about 15 minutes until potatoes are almost cooked.

3) Add smoked haddock and simmer for about 10 minutes until fish is cooked.  Remove the fish from the pan and, once cool enough to handle, remove skin & bones – don’t worry if fish falls apart a bit as it is nice to have different sized chunks.

4) Lightly mash the potatoes, then add the fish back in and the king prawns.  Bring back to boil  and simmer for a few minutes to cook the prawns (or just long enough to heat through if the prawns were pre-cooked).

5) Season to taste, remembering it will already be quite salty from the fish.  Serve in warm bowls and top with finely chopped fresh chives.

So, what IS IT with THAT name, Cullen Skink? Well there have been many debates about its origins. “Cullen” is simple enough – it is a village in the North East of Scotland. “Skink” has been argued to have various origins – the one I find most believable is that it is the old Scots word for shin or shank and, as it was a beef shin that was often used as the basis of a stock for soup, the word “skink” then became synonymous with “soup”. In hard times villagers were unable to afford beef, so smoked haddock became the base of the soup, which was still called “skink”. It remained a traditional dish in that little Scottish village, so much so that they now hold an annual Cullen Skink world championship and the dish is now known throughout the world.

Have you tried Cullen Skink? What did you think when you first heard its name?

P.S. If you liked this, then please check out some of my other Scottish themes…