Last year celebrity chef Paul Hollywood visited my local estate and farm shop.  He liked the Hopetoun estate’s produce and ethos so much that he spent two days there filming, speaking to all the staff and cooking and tasting produce in the farm shop.  He took home some fabulous seasonal game to develop his Hopetoun Game Raised Pie and invited Hopetoun butcher Derek down to his kitchen for a tasting session.  When this was all aired on Paul Hollywood’s Pies and Puds programme on BBC in November, the Hopetoun farm shop was overwhelmed by the response.  So started their inspiration to develop their own range of hand-crafted pies and pastry savouries, all featuring finest Aberdeen Angus beef reared right on the Hopetoun Estate.

They invited customers to tasting sessions to choose their favourites and so last Saturday, in celebration of the start of National Pie Week, the new range of Hopetoun pies and pastry savouries was unveiled.  I was delighted when Hopetoun invited me to come and pick up a “pie or two” for tasting.

When I arrived to collect them I was handed this beautiful box .  Have you ever seen pies more beautifully gift-wrapped? These are the boxes Hopetoun use for their gift hampers. 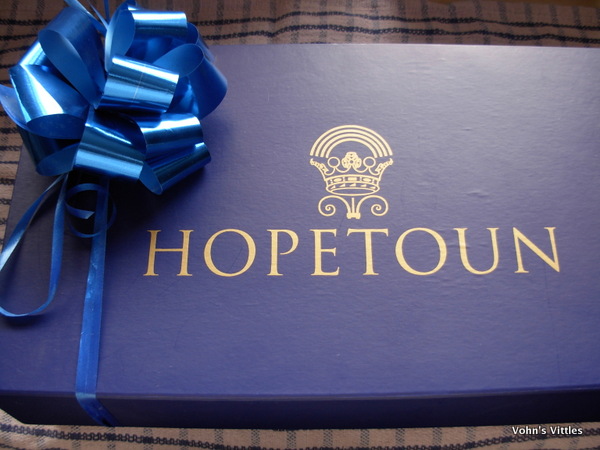 So, what’s in the box?  First up a selection of Hopetoun savouries – there is a sausage roll, a Scotch pie and a bridie.  Testament to how tasty these smell is my very old cat – he has been near comatose these past few weeks but bounded into the kitchen like a kitten as soon as the box was opened! 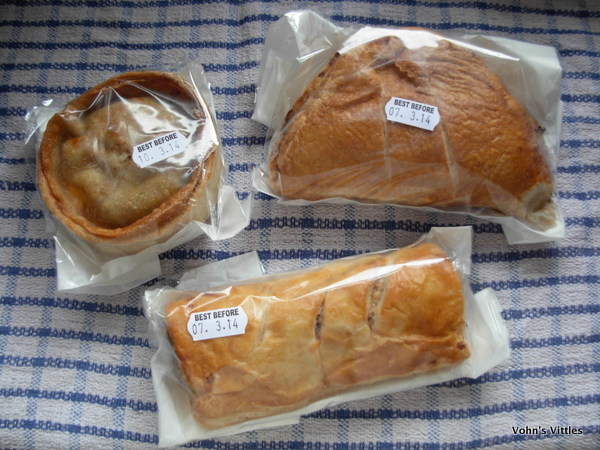 Underneath the savouries, wrapped up in tissue-paper emblazoned with the Hopetoun logo, a family-sized steak pie! 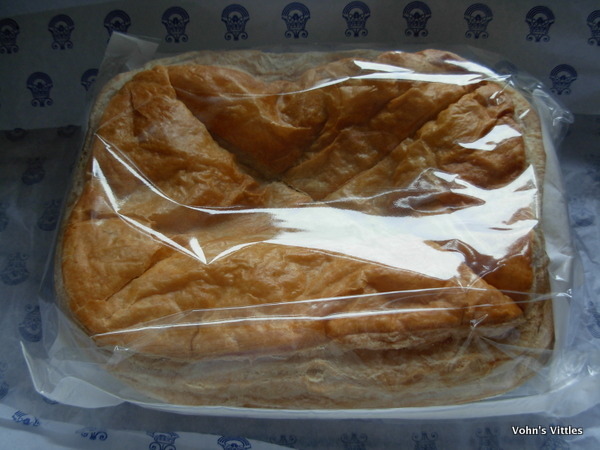 Here is the pie before Mr Vohn cooked it in the oven at 180ºC for 40 minutes.  It puffed up beautifully in the oven and looked really stunning – sorry no pictures of that as we were too eager to get eating! 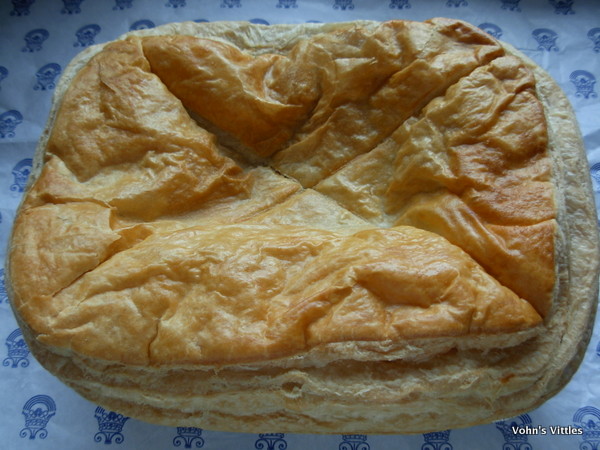 Look at this!  Big chunks of succulent steak in a tasty gravy, topped with flaky crispy puff pastry!  Mr Vohn served it with mash potato and petit pois. 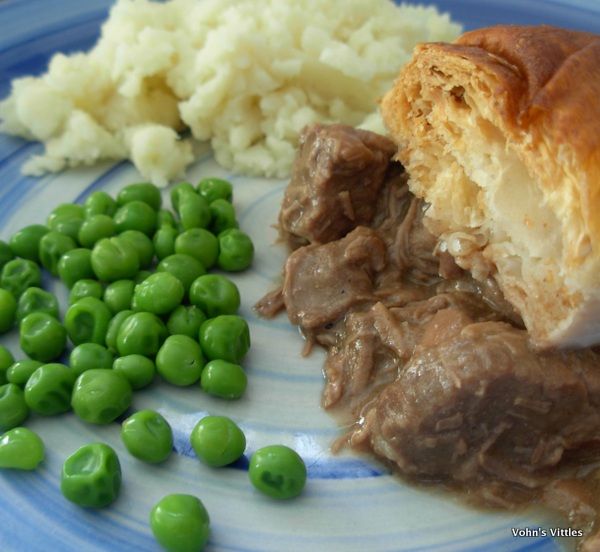 The verdict?  There is only one word – LUSH!

Mr Vohn, the pie connoisseur, says “now that’s a proper Scottish steak pie – none of your rubbish added – simply great beef and gravy” (this is a little dig at my need to add stout and vegetables when cooking steak pie mix!).  Afterwards he tells me he’d happily have it for our New Year’s Dinner – this is the highest praise I can think of for that most special of Scottish family meals!

As for my own views, it is truly delicious – there is a nice balance of big chunks of beef and smaller flakes mixing into the gravy.  There is just the right balance of pastry to pie, with a little piece or two left at the end to mop up the last of the gravy.  I do think it could do with a touch more seasoning – I add a good dollop of freshly ground black pepper and, most unusually for me, some salt.  It lifts the pie from great to amazing.  I’m fine with this though – I’d much prefer something to be under-seasoned than over.

Now on to the range of savouries. In true Scottish fashion, we have them on a football night in front of the TV!

First up was the sausage roll. 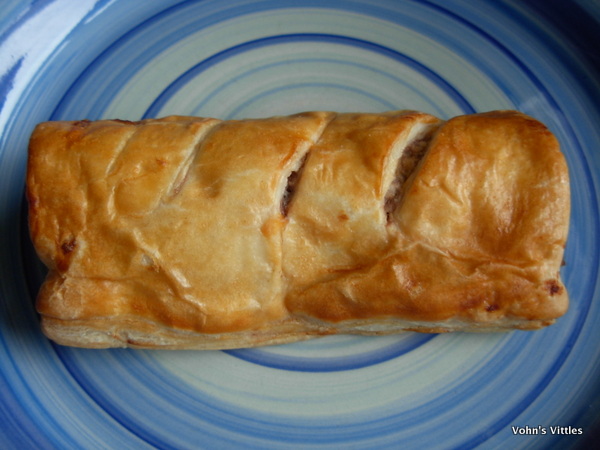 Look how densely the beef sausagemeat is packed inside! 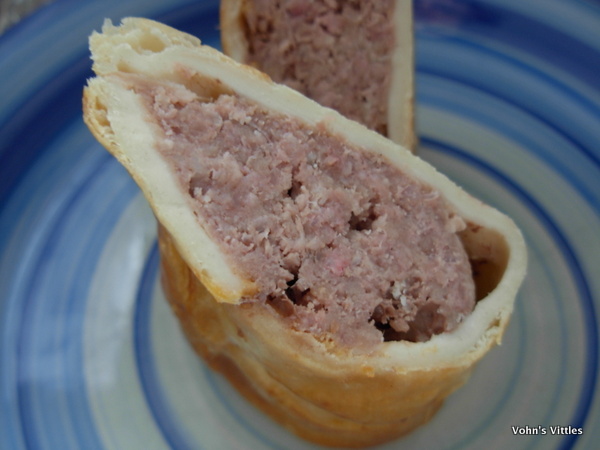 Next up is the Scotch pie.  For those of you who may not be aware of these little beauties, a Scotch pie is a small mince pie made with hot water-crust pastry.  The sides are double-crust, whilst the top is a softer single layer which is placed lower than the rim so it can be filled up with gravy. 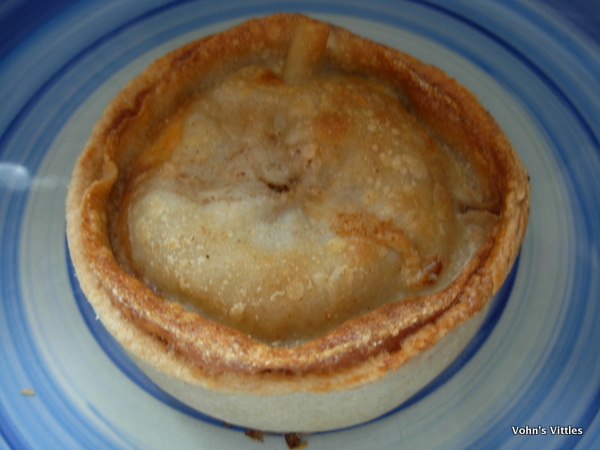 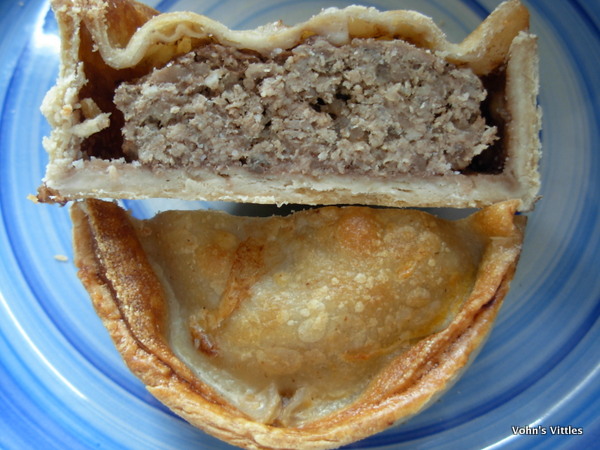 Scotch pies are most famous for being the half-time snack at Scotland’s many football matches, along with a cup of bovril. Mr Vohn is an expert on Scotch pies, having travelled all over Scotland as a football supporter & tasted Scotch pies from pretty much every town in Scotland and every independent bakery.  He tells me that in the past each football ground had their own artisan pie and competed against each other – it was a sad time for many loyal fans when mass-produced industrial versions began to take over.  Happily most football clubs are going back to the traditional local pies and featuring their uniqueness again.

What of Hopetoun’s Scotch pie?  I often find double-crust pastry a bit too hard but this pastry is easy to munch whilst still being lovely and crisp.  The mixture inside is moist and succulent with fine slivers of onion and is delightfully peppery.  Mr Vohn declares it “up there with the best”!

Finally is the Hopetoun Bridie and, by complete coincidence, we have saved the best for last! 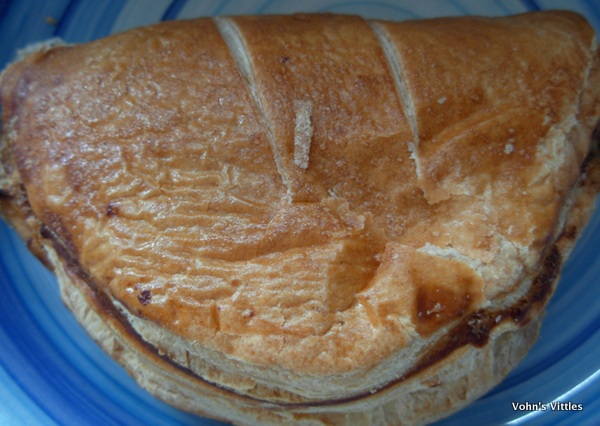 A bridie is a bit like a pasty without the veg.  It is packed full of seasoned minced steak, usually with beef suet and sometimes onions added too.  It is said that brides were invented in the Scottish town of Forfar and in fact Forfar Bridies are so unique and famous that there is a campaign to get them protected with Protected Geographical Indication status. 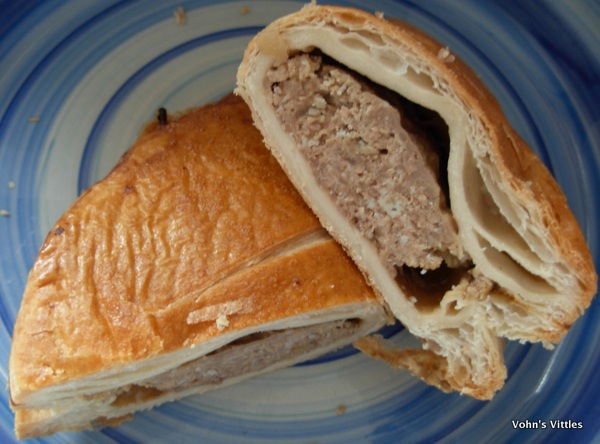 I’m not a fan of Bridies – finding there is way too much pastry for filling but the Hopetoun bridie is delicious – just the right amount of flaky pastry surrounding a rich succulent peppery beef mix.  For me it is the best bridie I’ve had and Mr Vohn says it is as good as, possibly even better than, those from Forfar, the home of bridies!

Mr Vohn and I both agree that the Hopetoun bridie is the runaway star of the Hopetoun savoury pastry range.  We will be regularly seeking this one out for picnics this spring and summer!

Hats off to Hopetoun – what better way to celebrate National Pie Week than to launch your own range of fantastic steak pies and savouries made from finest Aberdeen Angus beef grown right on your own estate!  Coming full-circle to their original inspiration of Paul Hollywood’s Hopetoun Game Raised Pie, Hopetoun will develop their range to include seasonal game pies in the winter. There are also plans for tasty summer quiches.

For those of you further afield, Hopetoun are hoping to add the pies and savoury pastries to their current home delivery options later this year.  Meanwhile, you can check out the rest of the fabulous Hopetoun range from their online shop.

P.S. Thank you so much to Hopetoun Farm shop for providing this complimentary box of pies for us to taste.
As ever, all opinions are my own (and Mr Vohn’s) and I was not paid for, nor asked to write, this review.