It is Paddington Bear’s favourite week of the year – it is national marmalade week!

In case you are unaware of this wonderful bear, you can find out more about him on his own website here. He is from Darkest Peru but was sent to live in England.  He was found all alone at Paddington station in London wearing just his hat and a sign saying…

Paddington’s favourite food is marmalade and he always has a spare jar in his suitcase.  He usually also has a marmalade sandwich tucked under his hat “in case of emergencies”
– a very sensible bear! 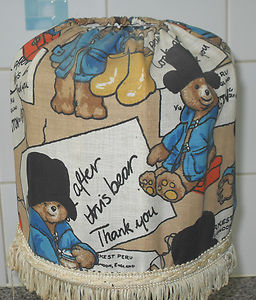 That picture is actually borrowed from eBay, as my own lampshade is in storage at my parents house (with strict instructions never to be thrown/given away!).
I was very excited the first time I was in Paddington station, especially when I found the little stall selling Paddington Bear memorabilia.  Can you imagine the joy on that small child’s face?  Imagine again – I was in my 20s at the time!  I was on a business trip, wearing a very smart suit and heels, but still skipping around like a small child though!

Oh – sorry – got a bit caught up there in reminiscing – back to the present, well almost – a few weeks ago I had my first attempt at making my own marmalade.  My favourite commercial marmalade is Rose’s Lemon & Lime, so I thought I’d have a go at Lemon and Lime.  So, first step was to look online for a recipe.  Oh my – it was a minefield – who knew there were so many ways to make marmalade and that it was such a competitive thing and that everyone seems to swear by their method as being the best and that all other methods are just plain wrong!

Anyhoo, I decided to invoke the spirit of Paddington Bear – he is a very sensible bear but also hates rules and regulations, so can often be very free-spirted.  Therefore I decided to throw all the rules out the window, take the best ideas from several different recipes and make up my own recipe.
The key point seemed to be to get the setting consistency correct and everyone mentioned this was really difficult.  However I have made jam a few times and reckoned I knew what I was looking for, so just jumped in.  It all turned out fine and here they are – my little jars of gold…

And here is one lit from below – I think it really does look like a little jar of bottled sunshine.

I was so pleased with it, I decided to enter it into a competition – you know me and how I love a good comp!  So I parcelled up one of my jars and sent it off to The World’s Original Marmalade Awards, which is held annually at Dalemain Mansion in Cumbria.  I entered the novice amateur category, it was judged at the weekend and I’ll get a scorecard posted out to me soon – watch this space!  They have entries from all over the world and you can find out more about it all here.

Have you made your own marmalade?   What’s your favourite flavour combination and do you swear by a particular method?