St. Patrick’s Day – the day when the whole world seems to go mad for all things green or Irish.

So I thought I’d share with you a bread from Ireland that is one of the easiest breads in the world to make.  I grew up in Northern Ireland and bread was a large part of our diet – from sweet to savoury, from potato bread to soda farls to veda bread, bread seems to play a part in almost every meal.  I didn’t really realise this wasn’t normal until I left home to come to Scotland.  When I make new foodie friends, often one of the first things they’ll ask is if I have any bread recipes handed down from my grandmothers!

The bread I’m going to show you today is called Wheaten Bread back home but I guess it could be described as a wholemeal soda bread.  It is really easy to make as it requires no yeast, the raising agent being bicarbonate of soda, so no time hanging around waiting for it to rise.  It also requires no kneading, simply mix the ingredients as lightly as possible, shape into a round and bake.   Cutting a cross into the top is the traditional way to aid the rising process and so the bread can easily be pulled into sections, or farls, at the table although I always prefer to slice it.

Preheat the oven to hot (220 Centigrade, 425 Fahrenheit, Gas Mark 7).  Put all the ingredients into a big bowl & mix together using your hands.  You want to just mix them together without kneading, otherwise the loaf will be tough.  Form into a ball, place on a baking sheet, flatten slightly & mark a cross in the top with a sharp knife.  Bake immediately for about 30 minutes until golden on top and the base sounds hollow when tapped. 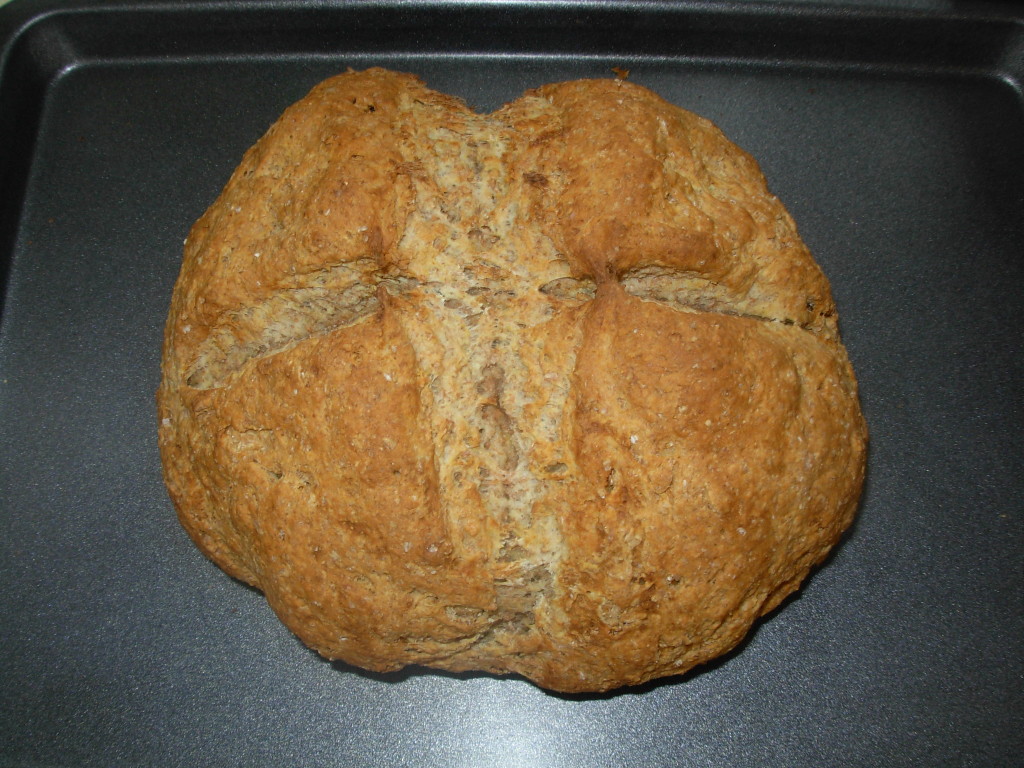 So you’ll have noticed I called this my “basic” recipe and didn’t specify the liquid*.  This is where you can vary the recipe to your own taste, or indeed what you may have in the house.  The traditional liquid is 300ml of buttermilk.  This is delicious, however I rarely have buttermilk in the house so this only happens if I have planned in advance.  More often the notion takes me to bake some wheaten bread and it has to be done immediately while the craving, or longing for home is at its height!  Therefore I have tried various liquids based on what I happened to have.  As long as it is something that will react with the sodium bicarbonate to produce bubbles of carbon dioxide, which is what makes the bread rise in the absence of yeast, you should be fine.  So, any dairy product should do the trick, as they contain lactic acid.  I often use leftover natural yoghurt or sour cream and mix it with milk to make it up to the 300ml if I don’t have quite enough.  Even a good stout will work well.

The other variation is whether or not to sieve the dry ingredients.  It will work fine without sieving but the outcome will be slightly different, with a more crumbly open texture if you do sieve.  Sometimes I just sieve the wholemeal flour and then use the bran or wheatgerm (or whatever it is that gets left in the sieve?) as a sprinkling on top of the loaf before I bake it.

So, with all those variations, every time I bake this I tend to get something slightly different but equally delicious.  Here is the loaf I baked this week.  I didn’t sieve the dry ingredients and used half low-fat natural yoghurt/ half semi-skimmed milk for the 300ml of liquid. 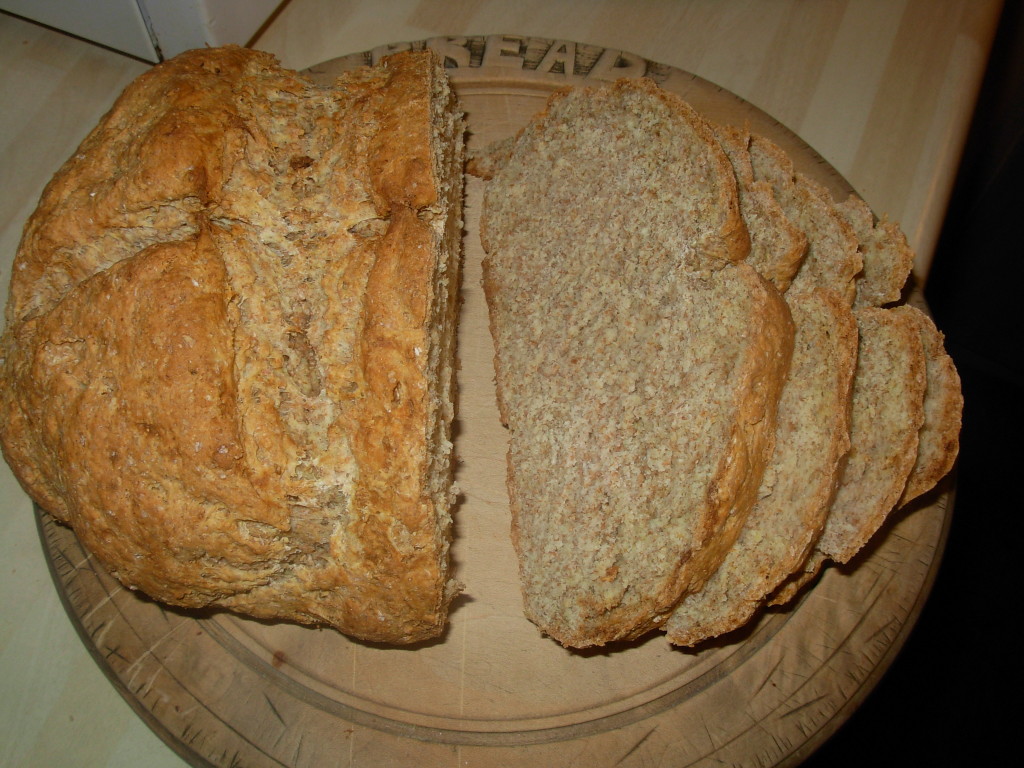 As you can see it is quite a dense texture with a nice crispy crust – yum!  It is delicious warm with butter/ lovely with cheese and soup/ fantastic at mopping up a thick stew/ or great at soaking up the excess if you have had a pint or two too many of Guinness today!