Regardless of whether or not you are Scottish or like to read poetry, I’ll bet you’ve sung or danced to an 18th century Scottish poem, even if you haven’t realised it.  The Scottish poet Robert Burns wrote the infamous Auld Lang Syne in 1788, which is still to this day often sung at New Year or at the end of parties and gatherings. 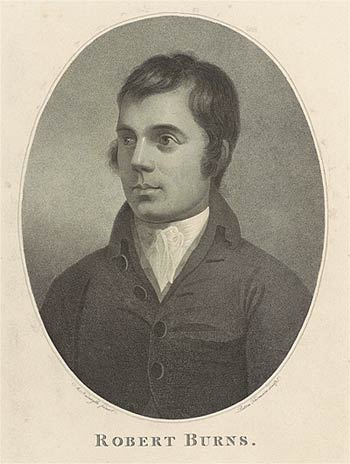 Burns’ suppers are held all over the world to celebrate his life and poetry.  They are usually held on his birthday, 25th January.  A Burns’ supper centres around the traditional Scottish dish of haggis, which is traditionally “piped in”, in other words brought in from the kitchen on a silver platter, following behind a bagpiper in full traditional Scottish dress.  Someone recites another of Burns poems “Address to a Haggis” before it is ceremonially sliced open and served to the guests.

A recent survey of visitors to Scotland found that many people think a haggis is a Highland animal!  It is actually a savoury pudding made from sheep heart, liver and lungs, mixed with onion, oatmeal, suet, spices, salt and all encased in sheep’s stomach.  It sounds horrendous to most non-Scots and when I first moved to Scotland I was somewhat reluctant to try it.  However, sourced from a good butcher, it is absolutely delicious and I urge you to give it a go.  In fact, every Burns night we all ask ourselves why we don’t make it more often as it is so good.   Some countries produce a poor substitute, especially those which have banned the use of sheep lungs.  In butchery, lungs are often called lights and it is this that makes the pudding so light in texture.  So, if you have tried haggis but think you don’t like it, come visit Scotland and give the real deal a go.

Coincidentally January 25th is also the birthday of my youngest step-daughter and we always have haggis for her birthday dinner.  Haggis is traditionally served with neeps (turnips) and tatties (mashed potatoes).  In Fife, the part of Scotland where we currently live, it is also served with minced beef cooked in beef stock, which adds a bit of moistness to the haggis as it can sometimes be a little dry.

Now, you know how I love my competitions.  Well I knew there was a competition being run by pastry producers Jus-Rol to create a topped pie, so I decided to keep back a little of everything from our Burns’ supper, so I could make a pie the following day to enter in the comp.  I layered up the leftovers in a pie dish and topped it with a decorated round of Jus-Rol puff pastry.   To keep with the Scottish theme, I wanted to decorated it with pastry thistles.  A quick search of the internet and I found this ceramic coaster from Scotweb, which I used as the inspiration for my design… What do you think of it?  Did you celebrate Burns’ Night?