Last Saturday Mr Vohn and I headed over to Edinburgh for a meal at Chop Chop. You may remember that I am a huge fan of Chinese food, always seek it out when I am home in Northern Ireland and even created a copy-cat recipe of my favourite takeaway dish for Chinese New Year.

I rarely eat Chinese food in Scotland, as I have frequently found it to be disappointing. However Chop Chop specialises in dumplings, something which is oddly rarely found on the menus at home, so I am looking forward to this. 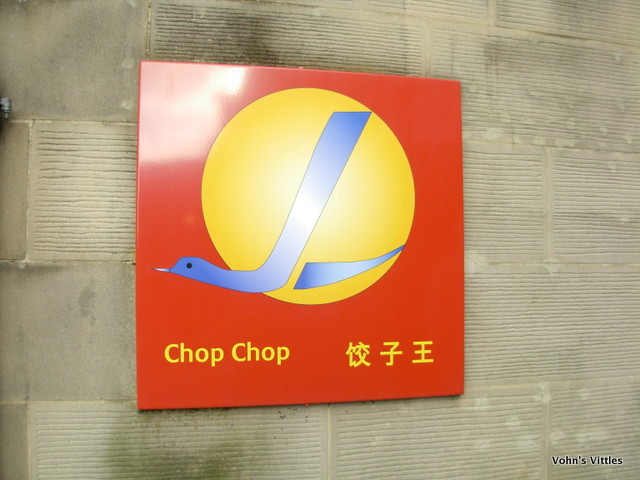 When owner Jian Wang first came to Edinburgh from China, she was disappointed to find that her favourite dish of jiao zi (boiled dumplings) did not seem to be available anywhere. She started to make them herself and supplied them to Chinese supermarkets all over the UK. Success led her to opening her Chop Chop restaurant in Edinburgh’s West End, followed by another a few years later in the docklands of Leith, both specialising in her beloved dumplings.

We are dining this evening in the Leith restaurant and the busy traffic-laden Commercial Street address is actually the back of the restaurant, whilst the entrance is on the other side. It is a lovely setting on this side, on a quiet pedestrian cobbled street, overlooking a long pond set with miniature fountains. The restaurant’s interior is light and airy, the ceiling strung with cute Chinese lanterns and the walls with traditional Chinese prints.

We are warmly welcomed by manager Yin, who turns out to be Jian Wang’s son. There are plenty of tables available this early on a Saturday night and our table is in the conservatory-style extension, right at the window, overlooking the fountains. We take our places at our table – shiny red of course, being the colour of luck in China.

Chop Chop uses the Chinese way of serving food, where dishes come to the table in a random order to be shared. Mr Vohn and I always love to try each other’s dishes, so this is ideal for us. There are large serves and small serves of most items on the menu and we place our order for one large and several of the smaller plates, so we can try out a variety of different dishes.

First to come to the table was this… 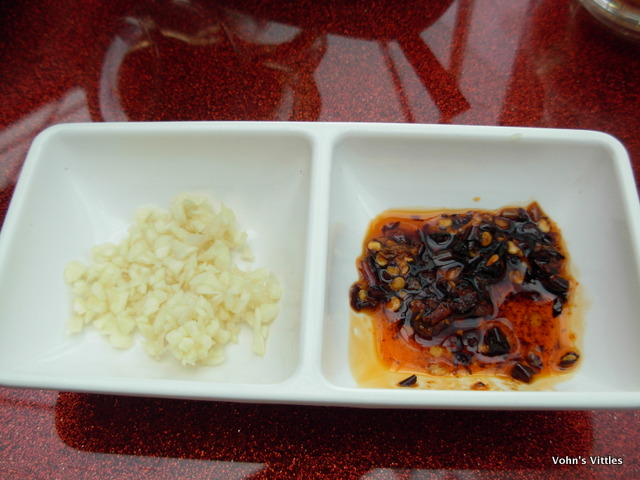 …a little platter of chopped raw garlic and dried red chilli in oil. We look at each other bemused as our waiter rushed off again. Once he returned with two bowls, he explained that we were to mix vinegar and soy sauce from the mini decanters on the table… 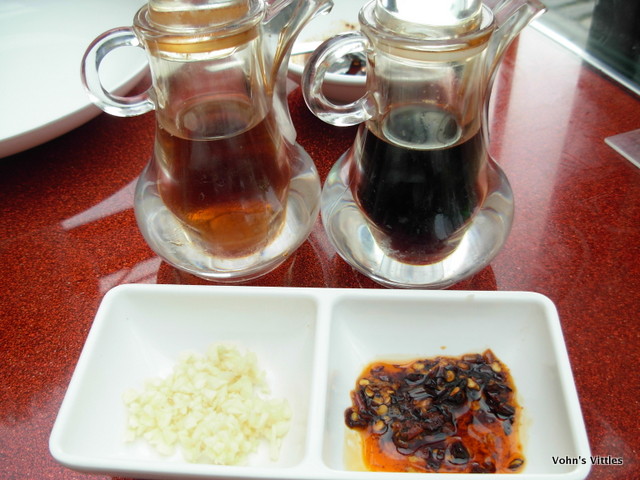 …and add garlic and chilli to taste to our preference 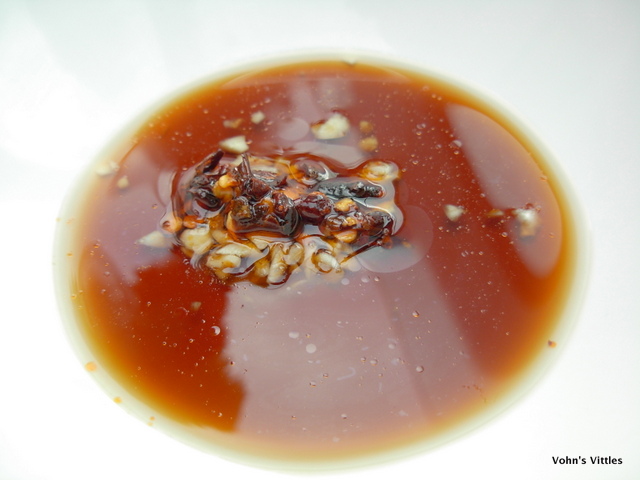 This is our dipping sauce for the dumplings. It is such a simple idea but genius, as each diner can have their sauce as mild or as hot as they like. Mr Vohn especially liked this as he is a chilli fiend and used up most of the chilli in his sauce!

Dipping sauces mixed and our dumplings start to arrive… 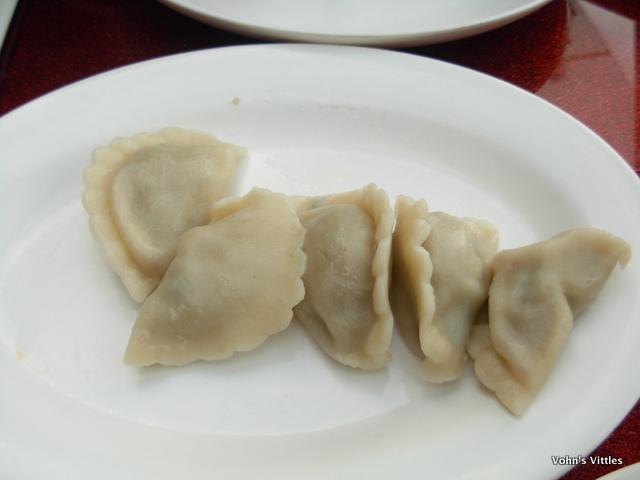 Eight pork and coriander jiao zi  £4.45
Yes, I can count too – there were eight! Eating came before photographing! 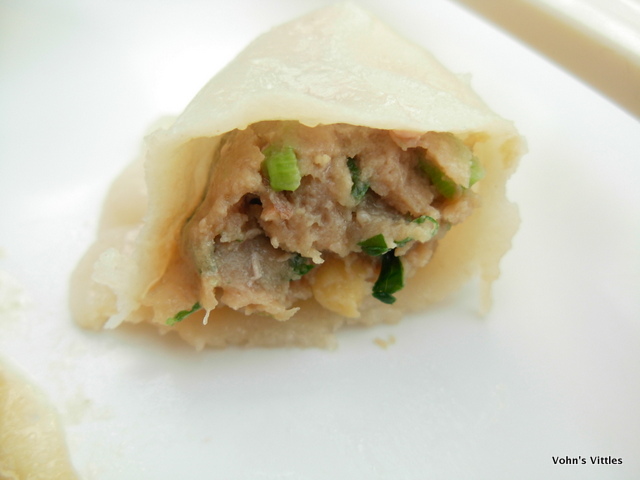 The jiao zi, or boiled dumplings, are little parcels of wheat flour dough, the filling spiced with sesame oil, ginger and soya sauce. These are delicate in pork and rich in coriander. These were recommended by Yin and I’m glad I asked him.
Boiled dumplings can often be sticky and heavy but these are light and delicious. 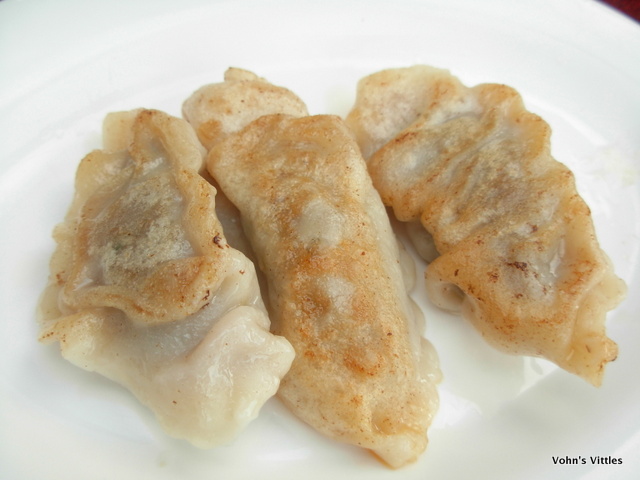 Four Beef and Chilli Guo Tie £4.95
Yes, it was four in a serve! Mr Vohn beat me to it before I could take a photo! 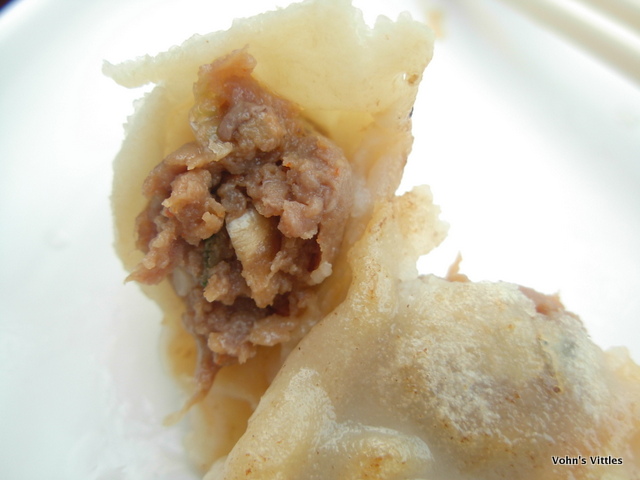 The guo tie, or fried dumplings, are slightly larger and pan-fried. These are chock-full of delicate beef with a fiery hit of chilli and are Mr Vohn’s favourites of the evening. 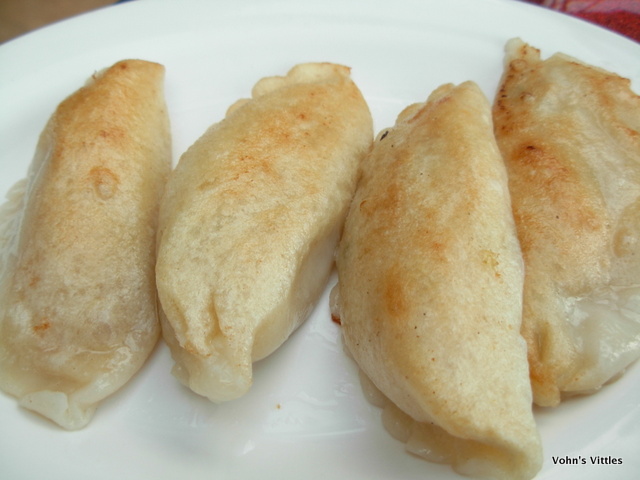 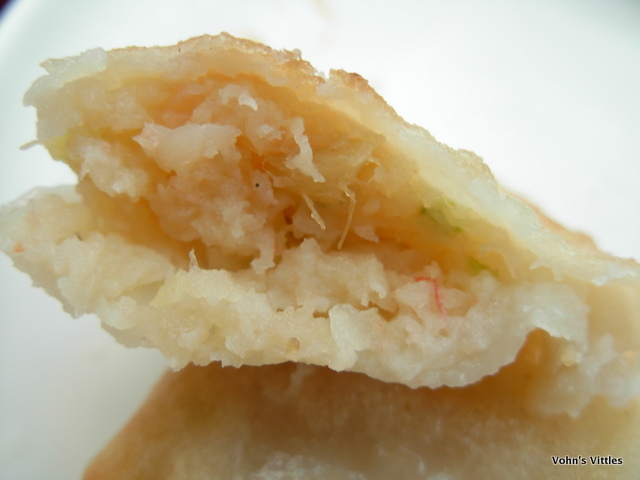 The other variety of guo tie I chose was the prawn. I actually had to ask if there was fish in these too, as they tasted more like fish than shellfish to me. I usually adore all shellfish but I just found these too fishy. This was the only dish which we didn’t enjoy. 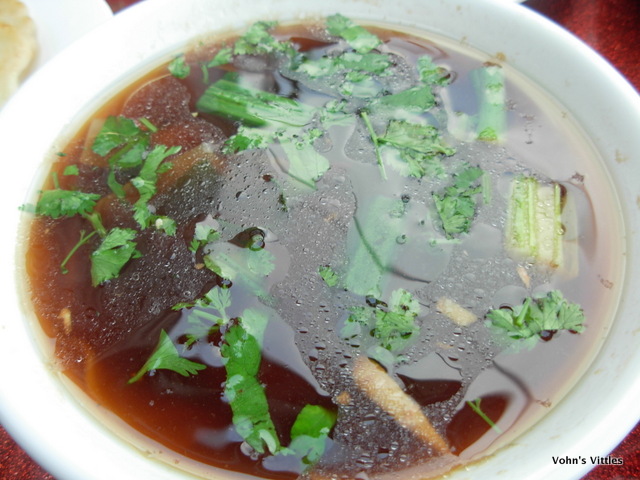 I’d spotted this soup on the online menu before we’d even arrived and just knew I had to try it. It is light and delicate at first, and although is vegetarian it tastes almost like a chicken broth flavoured with soya sauce. Then comes a crunch of fresh spring onion and ginger, which builds up to consume the palate before being calmed by the soft miniature sheets of dough. Mr Vohn finds this too gingery but I adore it and eat most of the bowl myself. 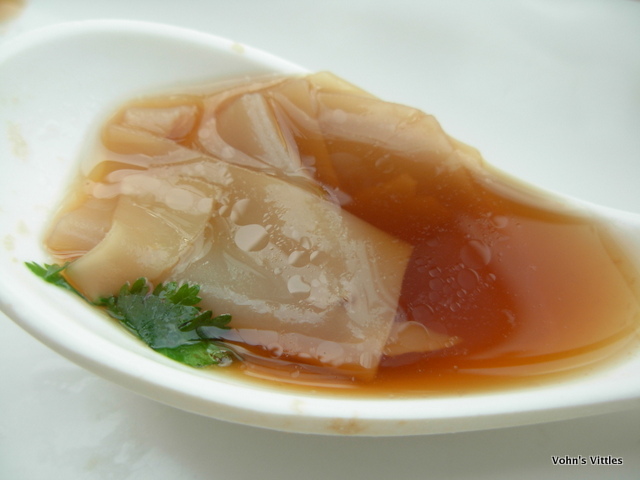 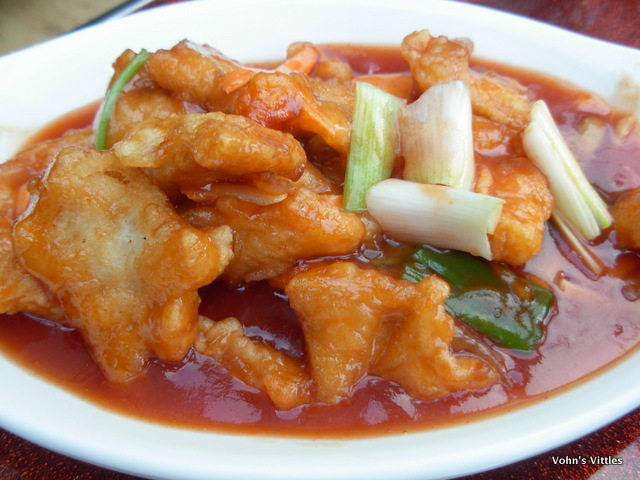 The crispy Northern chicken is described as having a soy, vinegar and sugar dressing which turns out to be like a fruity sweet and sour sauce. The chicken is succulent and tasty, the sauce delicious. 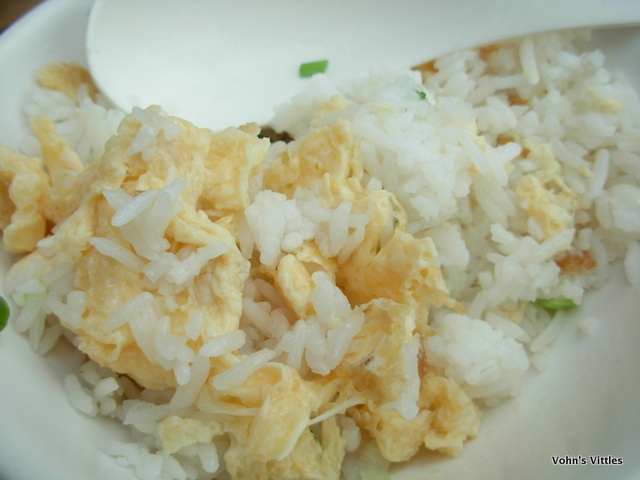 The fried rice has more egg than we’ve ever seen in a fried rice! The rice itself is barely fried but is seasoned perfectly. 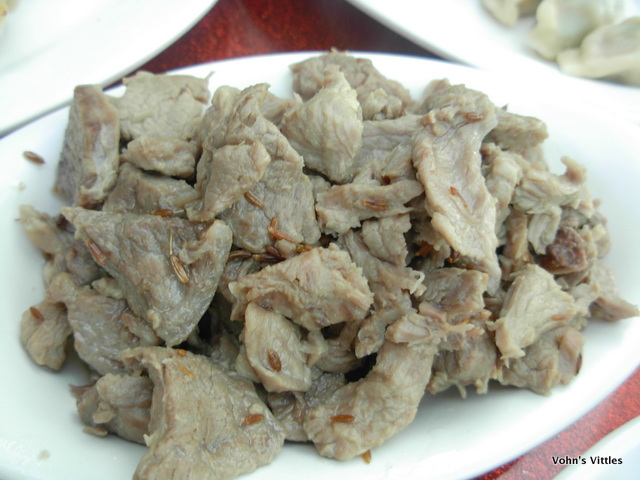 Lamb with cumin is apparently a popular barbecue dish in China. The lamb is soft and falling apart, subtle with cumin spice. A light touch is required in spicing this dish as cumin can so easily be overpowering.  It is spiced to perfection and we both love this dish.

I have really enjoyed our meal so far – this is my kind of dining, being able to taste lots of different dishes and experience many different flavours and textures. I just wish they hadn’t brought absolutely everything out at once, as some dishes were cold before we even had a chance to taste them. This left the dumplings a little rubbery and the lamb a little dry. Perhaps this works better on a busy evening where a couple of dishes might be placed at each table at a time.  A couple of dishes per person at a time with an interval of about five minutes before more are brought would probably be ideal.

We have eaten a banquet but there is still room for dessert!… 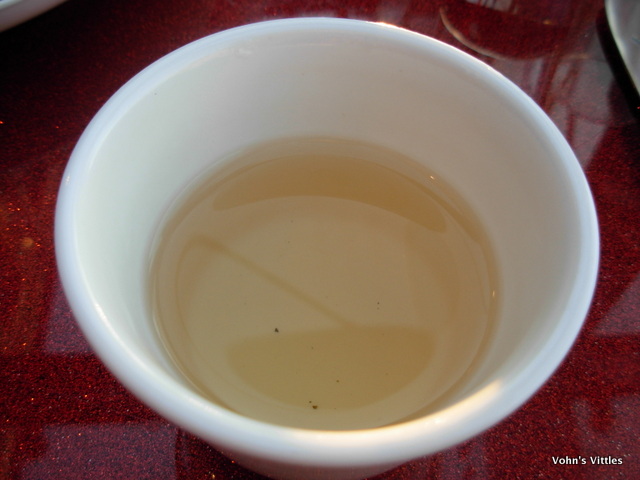 This is a lovely delicate green tea. I often find green tea becomes too strong once it has brewed for a while but I keep going back to the pot for more of this one, drinking most of the teapot myself! 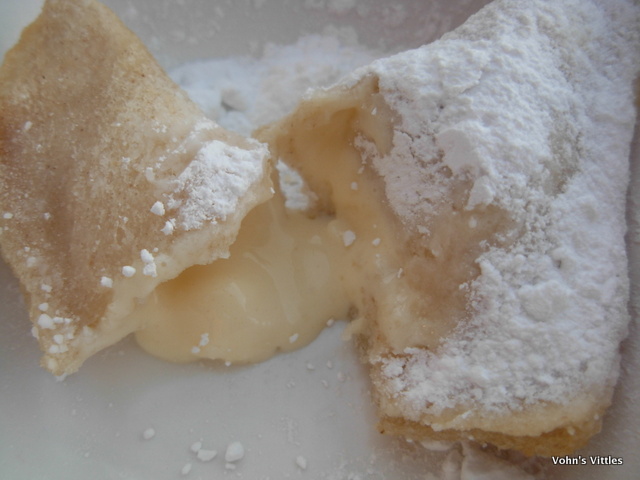 The Fried Mongolia is like a Chinese version of a baked Alaska. The ice-cream is wrapped in dumpling dough, deep fried and dusted with icing sugar. Mr Vohn had this and said it was lovely. Yes, dear reader, he didn’t let me anywhere near it!
He chose to accompany it with lemon sorbet, which was amazingly tart and tangy and a perfect match for the sweet fried dessert. All the ice creams and sorbets are imported from a fine ice-cream maker in the far east – otherwise known as Musselburgh – just along the coast to the East of Edinburgh! 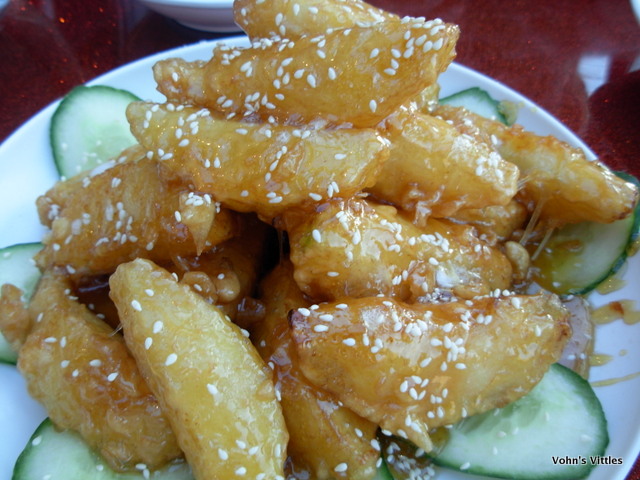 I chose the sugar string apple, which is a sharing dish for two. The caramel is literally sizzling hot – we can hear it as soon as it arrives!  There is a bowl of iced water, in which to dip the pieces, which instantly cools and sets the caramel. The soft sour apple is a great contrast to the sweet crunchy caramel, although it is difficult to eat whilst the apple is still so hot! The pieces near the base, which are sitting on the cucumber have a light hint of cucumber flavour, which is a fantastic combination with the sweet caramel – who knew?

We thoroughly enjoyed our meal and overall, I’d highly recommend Chop Chop. The food is delicious and very reasonable in price. There are even options for unlimited banquets, where you can re-order any dish from the set menus free of charge. Service is polite and attentive but laid back and not overly intrusive.

You can even order takeaway (or if you are lucky enough to live in Edinburgh, home delivery) and there are comfy red sofas provided for you to wait for your takeaway or for a table on busy nights. It seems that many others agree with my positive review because on the wall, behind those comfy red sofas, is a whole host of awards that they have received. These range from best Chinese restaurant in Scotland to most popular Chinese restaurant in Britain, to AA rosettes, to certificates of excellence from the World Association for Chinese Cuisine! If you do sit on those sofas, check out the folder on the table in front of you. It is full of the cutest kids drawings from a local primary school, sent as thanks to Chop Chop for providing them with a variety of items for their school project on Chinese New Year! I love businesses that help out the local community!

The food here is exactly what they promise – north Eastern Chinese home cooking done to a gourmet standard. It is nothing like the British-Chinese food we are used to. As they stay themselves “Get down to their restaurant chop chop”!

Vohn & Mr Vohn dined as guests of Chop Chop, whilst drinks were paid for independently.

P.S. Mr Vohn is still talking excitedly about getting to mix his own dipping sauce to his super-chilli-heat preference!