Scrumptious Saturdays is my series of weekly roundups.  I am frequently surfing around the interweb looking at lovely pictures of food and finding delicious new recipes that I want to try out. I thought it might be handy for you if I shared some of my favourites with you each week.

Last week’s theme was cocktails and with the fantastic weather this week I’ve had a few! This week, as tennis is one of very few sports that I love to watch, I have put together a menu in honour of the Wimbledon final tomorrow. The finalists are Novak Djokovic and Roger Federer.

Let’s start with Novak Djokovic, as he is seeded number 1 in the tournament. Novak discovered in 2010 that he is gluten-intolerant and he completely changed his diet immediately. Within twelve months of this, he was no longer collapsing mid-match, he won his first Wimbledon championship and rose to number one in the world ATP tour rankings. He attributes this success to excluding gluten!  This year he is on track to add a second Wimbledon championship to his ever-growing array of achievements. So, in honour of Novak, here is a gluten-free dish from his home country.

Pasulj is the Serbian word for bean and now is most often used for cannellini beans. Pasulj Corba is a Serbian white bean soup, rich with tomatoes and paprika. Here is a lovely recipe for it by Ksenia from At The Immigrants Table.

Roger Federer is seeded number 4 but, as possibly the greatest tennis player of all time and seven-time Wimbledon champion, he has every chance of winning another. Roger eats healthily most of the time but says he loads up on carbs after a match to restore his body. So, for dessert, here is a traditional pie from his home country Switzerland.

Engadine Nut Pie is rich in nuts and cream. Chris from Cooking Around the World has adapted it to add chocolate too since, after all, Switzerland is also famous for its chocolate!

Of course, if we are celebrating tennis at Wimbledon then strawberries are obligatory! Here’s my adaptation of the traditional English pudding of Eton Mess which I’ve made into ice cream.

So, tell me dear reader, do you like to watch sport and what food do you make to accompany it? 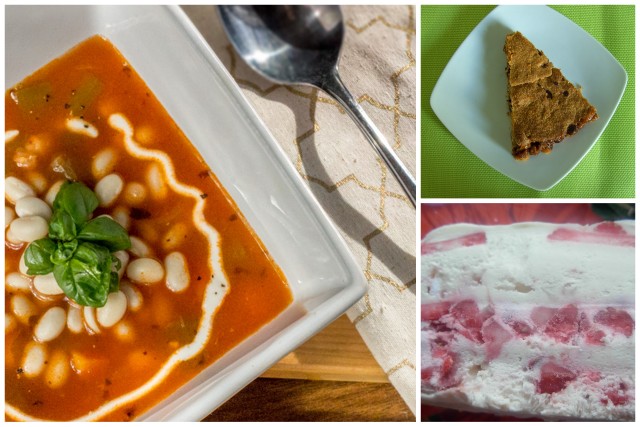