I first heard of Kimchi a couple of years ago but it has been the national dish of Korea for over two millennia!

Kimchi is a delicious fermentation of spiced vegetables. Traditionally Kimchi is buried in jars underground to ferment for months at a time. There are hundreds of different kinds of Kimchi but the most well known is a spicy sour cabbage version. 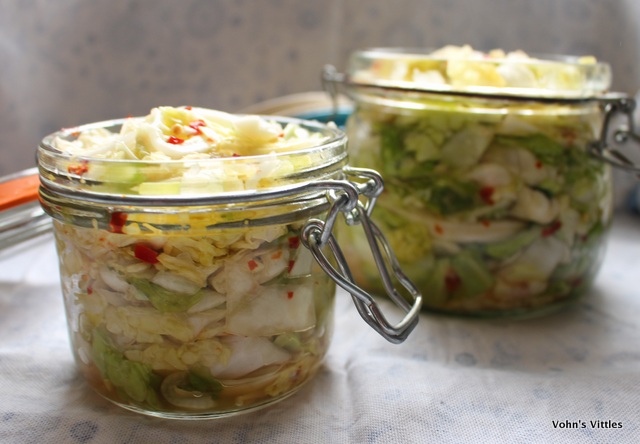 Making kimchi uses a process known as lacto-fermenting. This is basically a way to preserve food by creating an acidic environment which allows good bacteria to flourish and kills off dangerous things. These good bacteria are important for our guts to be healthy and the food is preserved without losing its goodness and can, in fact, be more nutritious after fermenting – for example fermented cabbage has more vitamin C than regular raw cabbage!  There is also some evidence to show that the micro-organisms in fermented vegetables are anti-inflammatory, reducing migraines and arthritic-type symptoms.

It is very easy to make Kimchi and you can easily adapt it to your own tastes, or to preserve a seasonal glut of vegetables. I love to eat Kimchi as a side dish with an omelette, or mixed in with a regular coleslaw or salad to add an extra zing of umami flavour, or even just standing at the fridge eating it out of the jar – it is addictive!

I recently made Kimchi from a variety of different cabbages which I needed to use up. I had a Savoy cabbage, a Sweetheart cabbage, most of a white cabbage that had been hanging around the fridge for weeks (I just needed to cut off some browned edges) and half a bunch of Chinese, or napa, cabbage (I just needed to discard the outer leaves which had gone a little slimy). 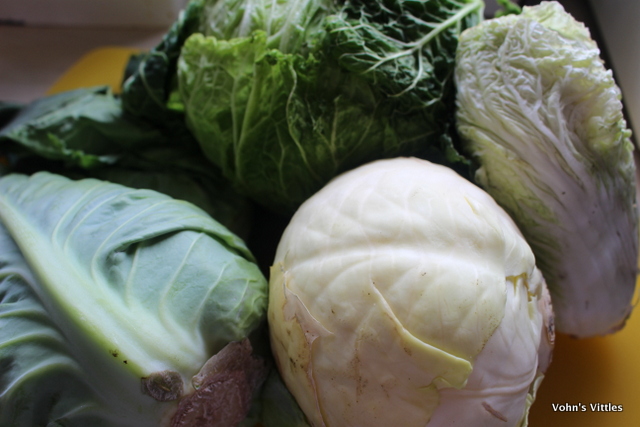 1) Start by shredding the cabbage, discarding the core. Place in a bowl and mix in the sea-salt.  Leave for about an hour until the cabbage starts to exude brine.  Place in a colander and rinse with cold running water. 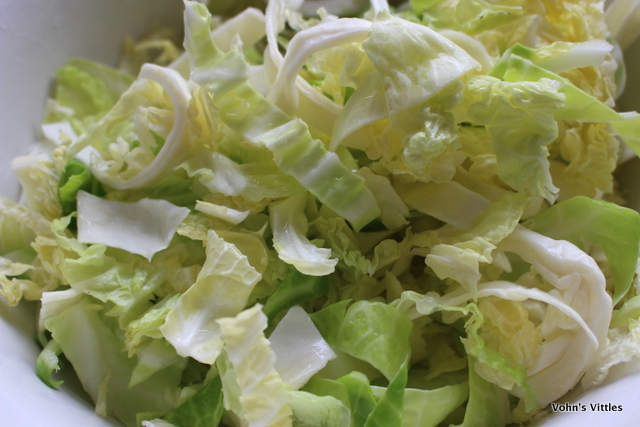 When I am making a big batch, using several cabbages at once, I simply do all this in the kitchen sink! 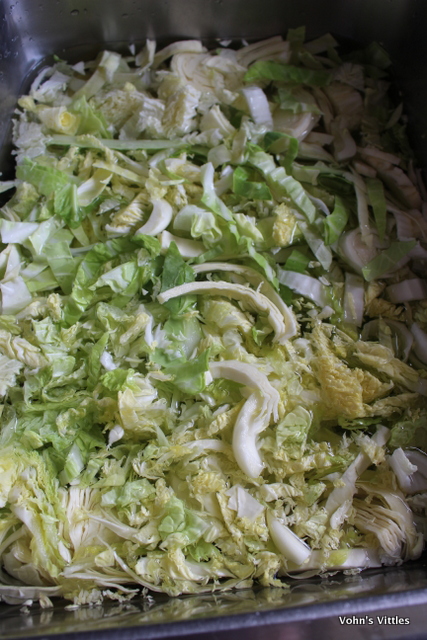 2) Make the Kimchi paste by mixing together the garlic, ginger, chilli, dried chilli and fish sauce (or veggie/vegan substitute). You can easily adapt the paste to taste by swapping the spices and/or adding more chilli if you like it fiery. 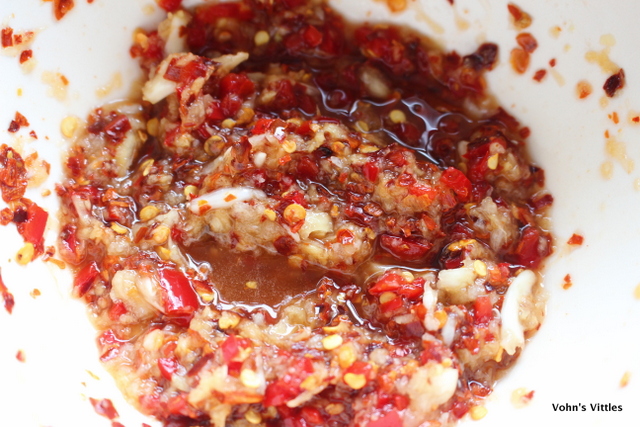 3) Add the Kimchi paste and spring onions to the rinsed and drained cabbage. Massage the paste into the cabbage – it is best to wear gloves whilst doing this! 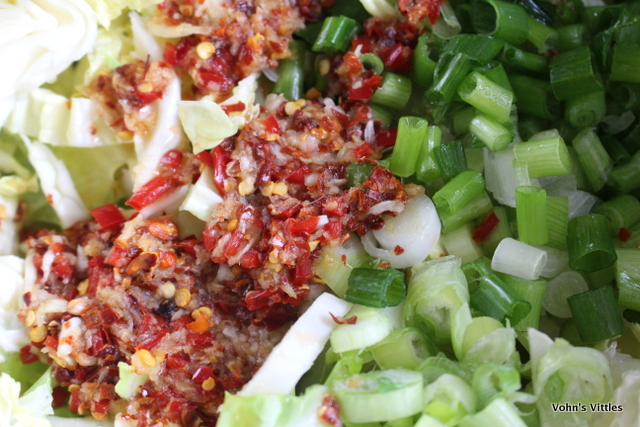 4) Pack the Kimchi tightly into jars. The easiest way to do this is one handful at a time, pressing it firmly down before adding the next handful. You will be amazed how much can fit in one jar!

Kimchi can be eaten fresh – just store it in the fridge – it is crunchy and delicious.

Traditionally though it is left to ferment. You can place a weight on top, or use a makeshift weight like I do, which is a glass jar or a tin can wrapped in cling film. The important thing is that it is heavy enough to press down the Kimchi so it is all covered in brine but still allows air in. If the brine doesn’t quite cover the cabbage, add water until it does.
It is also best to place the whole thing in a dish to catch any juices which may overflow. 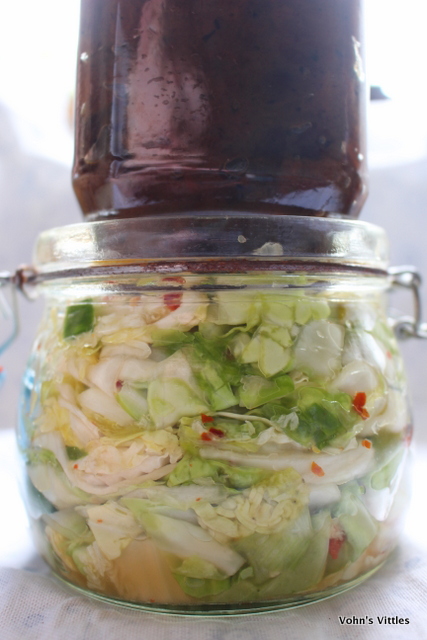 You will need to tend to your Kimchi for a few seconds each day – press down on the weight to release the fermentation gases that build up and ensure the top of the cabbage is still covered in brine. After a few days, start tasting once a day as the flavour changes as it ferments. Some people like a long ferment, some short – I like to leave mine for about a week. Once the flavour has developed to your personal taste, remove the weight, close the lid and store in the refrigerator.
Kimchi can keep for several months and even years!

I learned all about lacto-fermenting in a workshop I was at last year run by the Fife Diet and taught by Annie Levy.  Check out Annie’s blog Kitchen Counter Culture for more great lacto-fermented recipes.

So, do tell me dear reader, have you ever tried lacto-fermenting anything yourself?
If not, do as Annie says – be creative and experiment –  it is great fun & very good for your body!

P.S. I am entering this into Chris’s Foodie World Cup bloggers challenge, as South Korea are playing today (26th June 2014).